RARELY DO I CHAMPION OR SPEAK OUT FOR POLITICAL CANDIDATES. Yes, I have done so for one or two very close friends in the past, but only because I knew beyond the shadow of a doubt that the particular candidate was indeed the most-proven person who was near objectively the best-suited for the job.

Which brings me to Richland County Sheriff Leon Lott. Far more than a friend, Lott is one of my bosses, and he has been so for four years; which makes my public support of him appear self-serving. But it’s not. Sheriff Lott didn’t ask me to write this, nor would he. 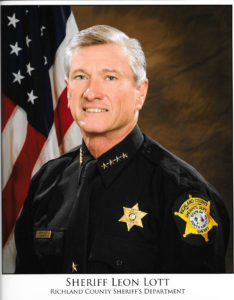 I say these things only because of my unique vantage point in having worked so closely with the Sheriff these past four years; not to mention having known him for many years prior and having worked on indirect projects with him before I began my part-time work with him at the Richland County Sheriff’s Department (RCSD). It is because of my work and what I have witnessed at RCSD that I can say with all confidence that he is indeed the best choice, frankly the only choice, for Sheriff going forward.

FIRST, who is Sheriff Leon Lott?

Like many of us who have spent most of our lives in central S.C., I’ve “known-of” Lott all my life. As a teenager during the 1970’s, I remember hearing my dad and others talk about this “young forward-thinking up-and-comer” at the Sheriff’s Dept.

Lott’s legend and reputation have only grown.

A one-time college baseball player who today holds degrees from several universities including the FBI Academy; Lott began his career as an RCSD patrol officer, quickly rising through the ranks and ultimately becoming captain holding (at different times) various command and leadership posts including that of the narcotics division, administration, uniformed patrol, an officer on the SWAT team, and a watch commander. Though such a listing doesn’t begin to do justice to the story of Lott’s work prior to 1993 when he left Columbia to become chief of police for the town of St. Matthews.

Three years later, in 1996, Lott ran a successful campaign for sheriff of Richland County, returning to Columbia and beginning the quest to transform RCSD into a high-speed, technologically advanced, 21st-century police force – at 900-plus personnel the largest in the state – and one which has been widely said to be “America’s law enforcement agency.”

In addition to his serving as sheriff, Lott commands the near 1,000-person S.C. State Guard (SCSG), a component part of the S.C. Military Dept. (SCMD) which includes the S.C. Army National Guard, the S.C. Air National Guard, the Emergency Management Division, and other elements. Under Lott’s command, the SCSG augments the S.C. National Guard during statewide emergencies and other missions. Lott previously served in varying command positions in both the SCSG and the SCMD’s Joint Services Detachment. The latter provides direct support to the state’s adjutant general.

SECOND, why is Lott the best sheriff to hold and continue holding the county’s top law enforcement leadership post?

If nothing else, there is experience and trust. We could talk all day about either as they are both hallmarks of Lott’s years of command and the reputation he has earned within the diverse communities he serves.

Speaking of communities, Lott’s approach to community outreach is unlike any experienced in most other law enforcement agencies nationwide. RCSD deputies don’t simply drive through neighborhoods, they get out and visit with neighbors, play ball with kids, replace old bicycles with brand new ones, and deliver meals to the elderly. That’s just the surface stuff.

Those who know Lott best will you that he takes his own personal community outreach even further. For Lott, it is not simply knocking on doors, standing on the front porch and talking. He steps inside, sits down and breaks bread with families. Always has.

That’s also why when Police2Peace, a national organization with a stated mission of helping law enforcement agencies “reduce barriers with police,” together with a research team from New York University came calling on RCSD with an academic study in 2018, they quickly learned how much the county’s various communities already embraced both the Sheriff and his department: And they also realized how much Lott wanted to advance those already ongoing good relationships.

The relationships are also internal. Everybody wants to work for RCSD. In the present-day environment where law enforcement agencies are struggling to recruit and retain officers and non-sworn personnel, there is a waiting list of hopeful new-hires for RCSD.

People in the department love their jobs. They don’t want to work anywhere else. Their work isn’t easy. But they know the Sheriff has their back. He takes care of his men and women. He trains with them. He’s 66-years-old but every bit as physically fit – and works at it – as the fittest officer on his Special Response Team (SWAT team).

“I won’t ask my people to do anything I won’t and haven’t done,” says Lott, adding. “They are more than simply deputies and employees to me, they are family.”

One example of Lott’s familial care is RCSD’s pre-PTSD conditioning program; preemptive training for his deputies designed to mitigate the symptoms of post-traumatic stress disorder (what Lott always refers to as post-traumatic stress injury) before those deputies hit the street. The program is Lott’s brainchild, designed solely to protect the emotional well-being of his deputies, the first of its kind in the nation, and one which agencies around the country have implemented based on the RCSD model.

Speaking of firsts, Lott’s RCSD is the only law enforcement agency nationwide that has been with A&E’s hit television series LIVE PD since it first aired in 2016. LIVE PD fans have traveled from all over North America just to meet the Sheriff and his much-loved deputies.

And when war-ravaged Iraq needed to establish its first-ever female police academy in 2010, the Iraqi government sought someone whom they believed was the most-experienced, innovative, bridge-building law enforcement leader in the U.S. who could and would travel to the city of Erbil, Iraq – about 220 miles north of Baghdad – and help them do just that. The Iraqis discovered Leon Lott (by reputation), who with one of his senior female deputies, traveled to Erbil and taught the Iraqi internal security forces how to properly train and successfully field female police officers.

Recently, when one of Lott’s retiring deputies celebrated his 90th birthday and – because of COVID-19 social distancing – was unable to attend a previously planned birthday party at the Sheriff’s office, Lott brought the party to him in the form of a 40-vehicle pass-in-review at the nursing facility where the elderly deputy resides.

Not only the deputy, but all the residents who were able-to turned out waving flags and happy birthday signs and receiving smiles and salutes from the parading deputies.

Sheriff Lott is running for re-election in the June 9 Democrat primary, and he seems to have broad support across all party lines. He’s a popular sheriff; Always has been. And as he has said time-and-again, “It’s not about politics or political parties. Politics have no place in law enforcement except for the fact that I’m a cop that has to be elected to the position. My base is all citizens of Richland County and not one political party.”

For these reasons and myriad others, I urge everyone – Republican, Democrat, and Independent alike – to re-elect Richland County Sheriff Leon Lott, in the Tuesday, June 9, primary.